Aorigele (4-3-0-1, Xindu Martial Arts Club) is the heavyweight sensation who was on back-to-back wins over Bob Sapp and Kawaguchi Yusuke before meeting with an unfortunate accident in his last match. When he faced fellow 2016 Openweight Tournament participant Myung Hyun-Man in his most recent bout, Aorigele took an accidental kick to the groin which was so loud and painful that the replay went viral.

Fortunately, Aorigele received immediate treatment, and quickly recovered with no lasting damage whatsoever. Now he will face Masuda Yusuke (6-12-3, AACC), a veteran wrestler with age and experience on his side. Masuda fought in M-1, KSW, Deep, and Pancrase before making a late revival by winning the IGF Heavyweight Tournament in 2014.

Aorigele versus Masuda Yusuke pits power versus experience, and when these giants clash, expect fireworks.

Shin Dong-Guk (1-0, Team Force) made a late debut in MMA by going from amateur to pro at 35 years of age. His ROAD FC debut against Lim Byun-Ha didn’t go past the first minute, because Shin came in with a vengeance and destroyed his opponent. Shin created a sensation by proudly wearing his fireman’s uniform to the cage.

Shin the Fireman will get to have his second fight in his hometown of Chungju when he takes on Imai Shunya (3-1, Mouri Dojo). Imai is much his junior, at 22 years of age, and has kickboxing experience to compliment his record in MMA.

Shin Dong-Guk versus Imai Shunya will be a very aggressive battle as both strive to remain on a win streak.

A Pride-era throwback is set between two legends of the sports: Minowa Man vs Yoon Dong-Sik. The prowrestler and the standout Judoka will clash at middleweight. An Openweight rematch between Kim Chang-Hee and Shim Gun-Oh is set after an unfortunate accident stopped their first match too early. Now the brawling big men are eager to get back into the cage and show off kickboxing versus wrestling. Also, breakout fierce young fighter Park Jung-Eun and ROAD FC Women’s Atomweight Champion Ham Seo-Hee’s teammate Park Si-Woo will make for a thrilling match in a battle of the hot prospects. Catchweight at 86kgs big men Kim Eun-Soo and Kim Dae-Sung both have a penchant for getting into first round collisions, so this match up should be a real banger, if even only for a minute.

ROAD FC is honored to present MMA for the first time as a part of the 19th annual UNESCO-Sponsored Chungju World Martial Arts Festival. As the birthplace of Korea’s 1,00-year old martial art, Taekgyeon, to becoming the venue for the international exchange of diversity and excellence in traditional martial arts, Chungju will again usher in another first for martial arts history in Korea.

For more information about the Festival, please visit the Official Website (http://www.martialarts.or.kr/index_eng.php). 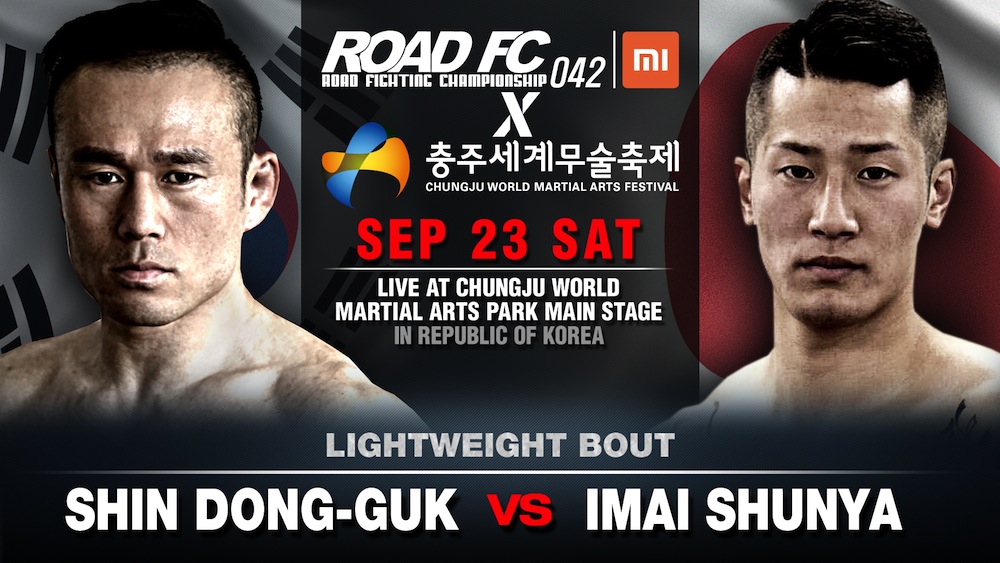