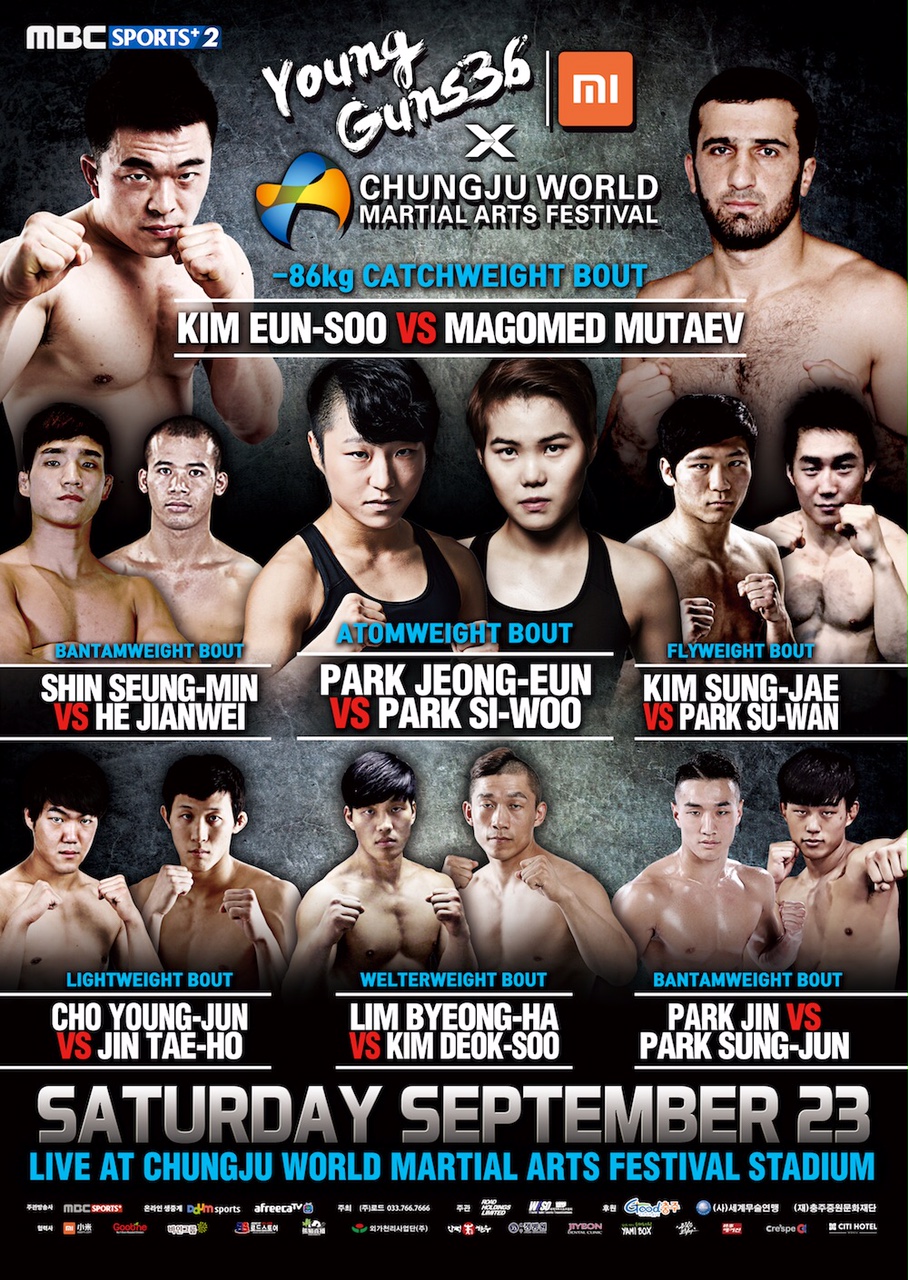 September 20, 2017 – ROAD Fighting Championship introduces the matches on Young Guns 36, the undercard for Xiaomi ROAD FC 042, which will be held during the Chungju World Martial Arts Festival in Chungju, South Korea this coming Saturday, September 23.

The Young Guns series, held as the undercard for many ROAD FC numbered events, is designed to feature fighters who are transitioning from amateur MMA, new foreigners, those coming off a delayed break, and those who are seeking a much-needed resurgence in their career. As part of a national system for MMA fighters, three separate amateur leagues feed into the Young Guns events: once a fighter has proven his- or herself, they are able to make a professional debut during a large live event.

For struggling professional fighters or those coming off a long layoff, the Young Guns undercard gives an opportunity to continue a professional career in MMA and get back on track. Foreign fighters new to ROAD FC are given a chance to debut on a live event and prove if they have potential.

Young Guns 36 exemplifies what the series is about. There are many fighters making their pro debut after trials in the amateur Central, Into and Attack Leagues. Several well-known fighters with tarnished records are going to be battling for comebacks. And in the main event for the card, Russian Magomed Mutaev makes his debut against Kim Eun-Soo who is returning to action after a 2-year layoff.

Kim Eun-Soo started his career in Heat in Japan, then claimed a great win over Lee Sang-Soo at ROAD FC 006. He has a 100% finish rate with 6 T/KOs. Magomed Mutaev is an M-1 veteran who most recently won a split decision over ROAD veteran Amilcar Alves. Nine out of his 11 wins were finishes. Kim’s punching will be on display, and Mutaev can bring a host of weapons to counter it.

Park Jeong-Eun is a well-rounded prodigy from a sambo background who started off her career fighting the best in her division. Park Si-Woo is a kickboxer with gold medals in WAKO and the Incheon Indoor Games who transitioned through the amateur ROAD FC Attack League. Well-rounded Park Jeong-Eun has already become a hot prospect to watch, and Park Si-Woo will be looking to join her on the list, should her grappling level match her kickboxing.

Shin Seung-Min has a kickboxing base and transitioned through the amateur Into and Attack Leagues with a total of 6 KOs and an amateur belt from Wardog. He Jianwei was a contestant on UFC’s TUF China, and he has a strong grappling base. Shin will be looking to showcase his own style and he’ll face a veteran in He who brings a lot more fight to the table than what his underdog record suggests.

Kim Sung-Jae has a seesaw record from facing some of the strongest in the division at home and abroad, with his most recent loss being a decision to stand-out Grigory Popov. Park Su-Wan was 2-1 in the ROAD FC amateur Central League before his pro debut, and his performances advanced him to the Young Guns card. Both are very tough and have loads of endurance, and both are coming off losses, so this will be a crucial record-breaker for the winner.

Lim Byeong-Ha is an excellent grappler with many medals in BJJ competition, plus he holds 2 wins in WAKO kickboxing. Kim Deok-Soo competed in sanda since 2008, winning in three national competitions. Lim needs his “0” to go, and he’ll get the chance against debutant Kim, but this is definitely a style-versus-style match.

Cho Young-Jun has a grappling base and is active in Brazilian Jiu Jitsu competition. Jin Tae-Ho has medalled in no gi grappling and sanda. While both have found success outside the cage, they have struggled to gain footing in MMA. This grappling match is a good test to see who can make the style work and get them back into the win column.

Park Jin comes from a Muay Thai background where he was a National runner up, on the National team, and amassed a record of 7-5. Park Sung-Jun is a well-rounded MMA fighter with a 2-1 amateur and 2-0 semi-pro record in the ROAD FC Central League. This will be their first chance to impress the fans on a big and bright stage.

In the main event, Aorigele versus Masuda Yusuke pits power versus experience, and when these giants clash, expect fireworks. A Pride-era throwback is set between two legends of the sports: Minowa Man vs Yoon Dong-Sik. An Openweight rematch between Kim Chang-Hee and Shim Gun-Oh is set after an unfortunate accident stopped their first match too early. Shin Dong-Guk versus Imai Shunya will be a very aggressive battle as both strive to remain on a win streak. Jang Ik-Hwan versus Emil Abbasov will open the card and provide a high level of striking excitement.

Live on MBC Sports+ in Korea

Shin Seung-Min vs He Jianwei 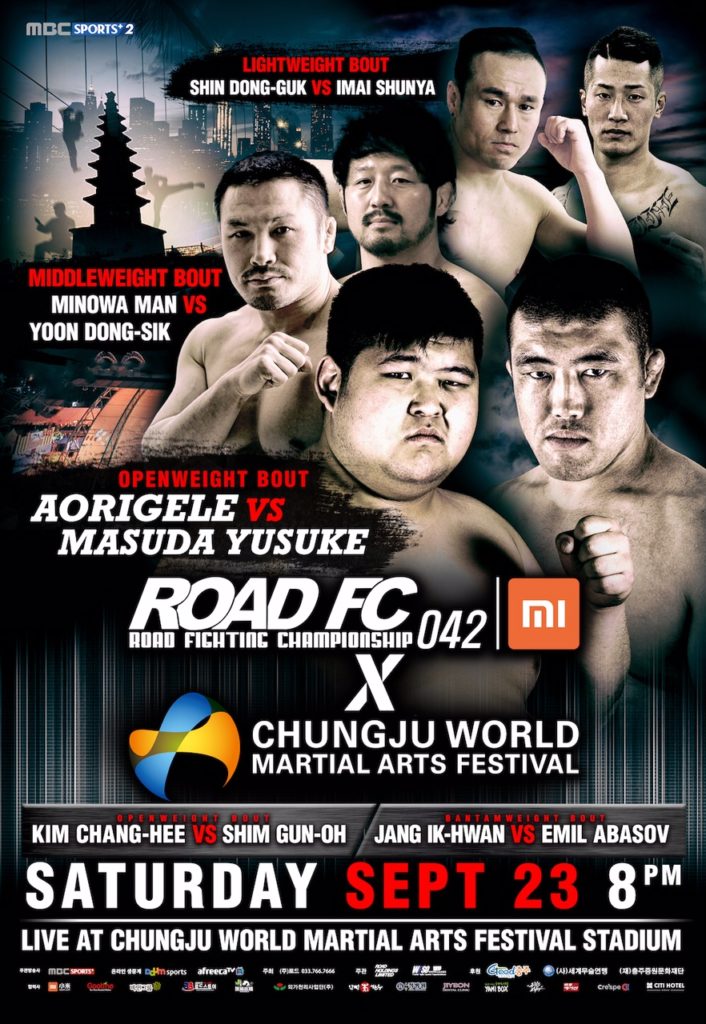