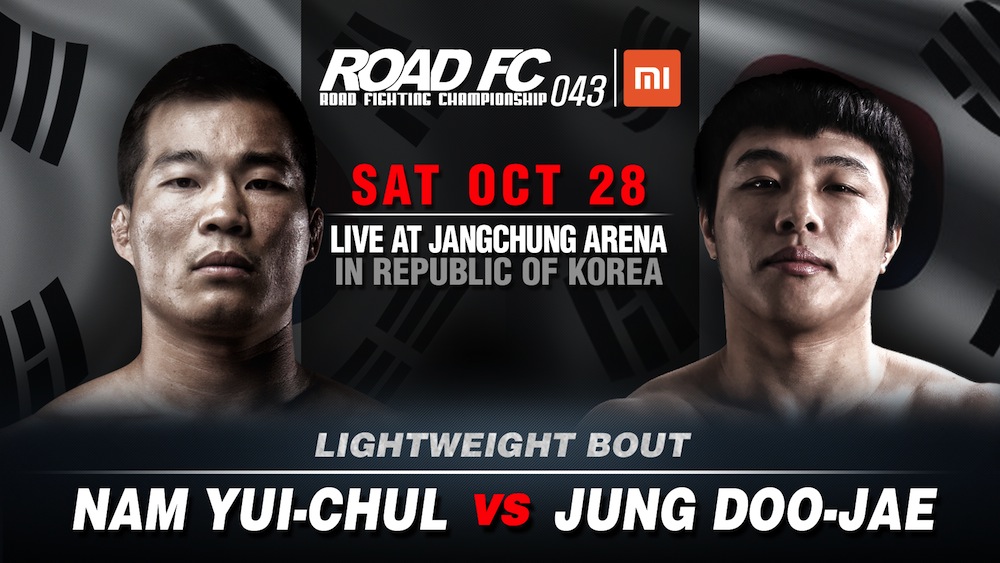 Nam Yui-Chul (18-8-1, Sanae Nam MMA) returns to the cage following his loss in the opening round of the $1 Million Lightweight Tournament. In his phenomenal career start, Nam won the Spirit MC 70kg title in 2006, and later contended for the Legend FC belt. In the ROAD FC Lightweight tournament of 2013, he tore through the field and became the Champion, defending his belt once successfully. Nam then signed to the UFC where he won Fight of the Night Honors versus Tokudome Kazuki. Following a 3-fight tour in the UFC and recovery from injury, he returned to ROAD FC and participated in the $1 Million Tournament with back-to-back knockout losses to dark horse Tom Santos.

Jung Doo-Jae (33-18-1, Ronin Crew) is one of the most experienced Korean fighters with a strong base in boxing. He is a consummate veteran from the first days of Korean MMA having competed since 2004 in NeoFight, MARS, Spirit MC, then in Japan’s Gladiator and Deep. Finally Jung came back home to Korea and ROAD FC in 2014. Jung has never backed down from a fight offer, and when he enters the cage, the only way he goes is straight forward.

In over 20 years of MMA between them, it’s surprising that these two lightweights have never met. Once Nam Yui-Chul and Jung Doo-Jae are finally in the cage together, don’t blink!

In the main event, Choi Young versus Kim Hoon for the ROAD FC Interim Middleweight Championship is the culmination of Korean MMA pride from the very beginning to the current pinnacle of popularity and skill. This match is guaranteed to deliver thrills from both fighters – 12 years after they both first stepped foot in an MMA ring!

New Wave MMA ROAD FC is the stage where legends shine, rookies thrill, and epic battles are waged that determine the future of MMA. From the pageantry of the grand entrance to the final crunch of the KO, ROAD FC showcases the very best of Mixed Martial Arts sports and entertainment. As we say in Korea, “Fighting!”​