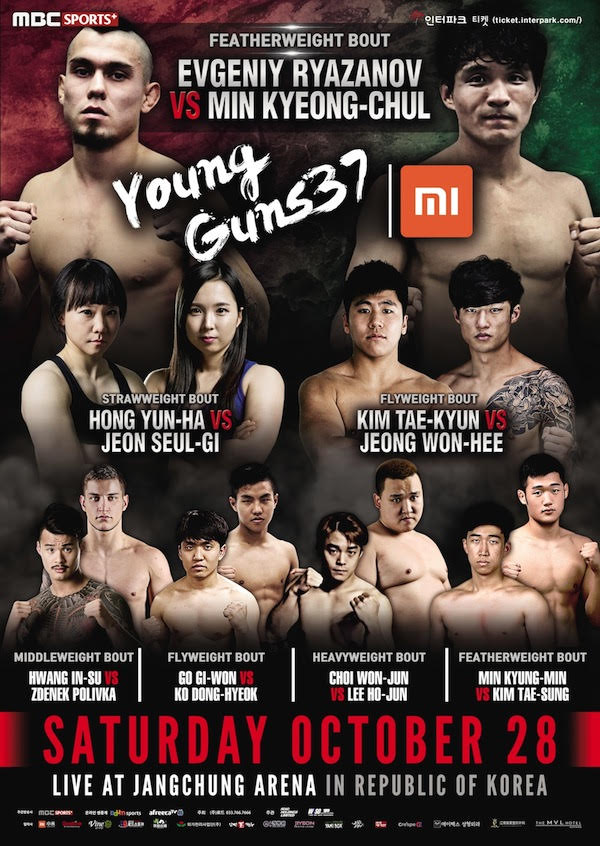 September 28, 2017 – ROAD Fighting Championship announces all matches for Young Guns 37, the preliminary card for Xiaomi ROAD FC 043 in Seoul, Korea on October 28, 2017 in the Jangchung Arena.

As the main event of Young Guns 37, style versus style takes center stage. Evgeniy Ryazanov is a technical sniper and acrobatic kicker, while Min Kyeong-Chul prefers to get in the pocket and throw bombs.

Female fighters have a hill to climb when starting their careers; Hong Yun-Ha and Jeon Sul-Gi are examples of this. Both women are hunting for their first professional win. Hong hails from a jiujitsu powerhouse team, while Jeon comes from stand-up league Max FC and was on the 2012 National Sanda team.

Kim Tae-Kyun versus Jeong Won-Hee pits two punchers against each other who both like to stand and bang. Neither fighter knows how to back up, and they both prefer to keep it standing, so fans will enjoy a fast-paced brawl.

Hwang In-Su versus Zdenek Polivka features two rookies in the sport against each other. 22-year old Hwang is fresh off his first fight and victory, while 19-year old Polivka is barreled through an amateur year and is seeking his first pro win. These aggressive youngsters will be exciting.

Gi-Won has had two pro fights and shown off very good ground positioning and striking. Dong-Hyuk spent two years in the ROAD FC amateur leagues, and he’s developed a good skillset. Both have yet to get their first pro win, proving that starting pro MMA in Korea is tough, so look for amazing performances out of these two rookies.

Choi Won-Jun and Yoon Jae-Woong are willing to forget the weight cut and focus on turning around their records. Choi has a Taekwondo base and Yoon has a boxing record, which will make for a nice slugfest as these two attempt to rebound.

Min Kyung-Min started MMA in 2014 with a kickboxing base and has been busy in the ROAD FC amateur leagues, and Kim Tae-Sung is 6-1 in the amateur Central League. This is recognized more as a pro debut for both youngsters, which will pit striker against grappler.

In the main event, Choi Young versus Kim Hoon for the ROAD FC Interim Middleweight Championship is the culmination of Korean MMA pride from the very beginning to the current pinnacle of popularity and skill. This match is guaranteed to deliver thrills from both fighters – 12 years after they both first stepped foot in an MMA ring!

Plus, Kim Seung-Yeon and Alexander Merezhko are set for another $1 Million Tournament reserve match; Lee Jeong-Yeong will face returning veteran Marcio Cesar; and two of the hottest prospects from Korea and Russia will face each other, Kim Kyeong-Pyo versus Arman Tsarukyan.

Previous articleDana White on McGregor Vs Diaz-3 : Ye nahi ho sakta !
Next articleUFC 216: Ferguson vs Lee – Put Up or Shut Up