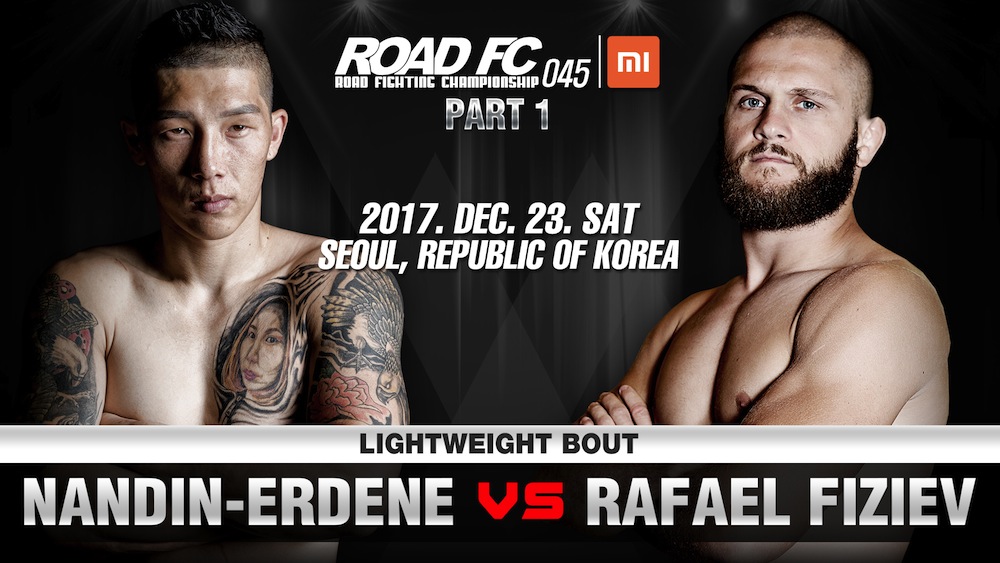 Nandin-Erdene Munguntsooj (7-3, Team Fighter) is a Mongolian mainstay of ROAD FC whose rise up the rankings has been remarkable. He was a Mongolian National Kickboxing Champion and a National Boxing Champion before he moved to South Korea for work. Nandin’s infectious smile and lightning KOs have made him a fan favorite.

Nandin-Erdene went on a rampage in 2016-7 with back to back KOs over Ki Won-Bin and Korean OG “Parky”, straight into the $1 Million Tournament International Trials with a win over Bruno Miranda, and an opening round massive upset over Toninho Furia. As the competition got deeper, Nandin-Erdene’s spree came to an end as the young phenom Mansour Barnaoui owned him in the clinch, then finished him off with a choke on the canvas.

“Ataman” Rafael Fiziev (4-0, Tiger Muay Thai) is a Kyrgyzstan fighter who has amassed a record of 39-7 in Muay Thai and kickboxing – a total of 29 by way of knockout – before his successful transition into MMA. Since 2015, he has won several commendable Muay Thai titles.  He has two titles in Thailand, a Russian Muay Thai championship, and took silver at the IFMA World Combat Games. A video of him went viral when he used a move straight out of The Matrix to dodge a high kick during a Toyota Marathon match.

Fiziev holds all first-round finishes including his remarkably devastating win over Kim Seung-Yeon in the final International Trials bout for the $1 Million Lightweight Tournament. Although his debut earmarked him for the opening round of 16, Fiziev sustained a broken hand against Kim, and needed extensive recovery time, which kept him from the tournament. Now, with the doctor’s clean bill of health, fans can finally watch the super striker in action once more.

Nandin-Erdene versus Rafael Fiziev is a pairing of two brilliant strikers who know how to entertain – and finish fights in devastating fashion.

Plus, outstanding women’s professional wrestler from Japan, Yoshiko, will be making her third appearance in an MMA bout in the ROAD FC cage