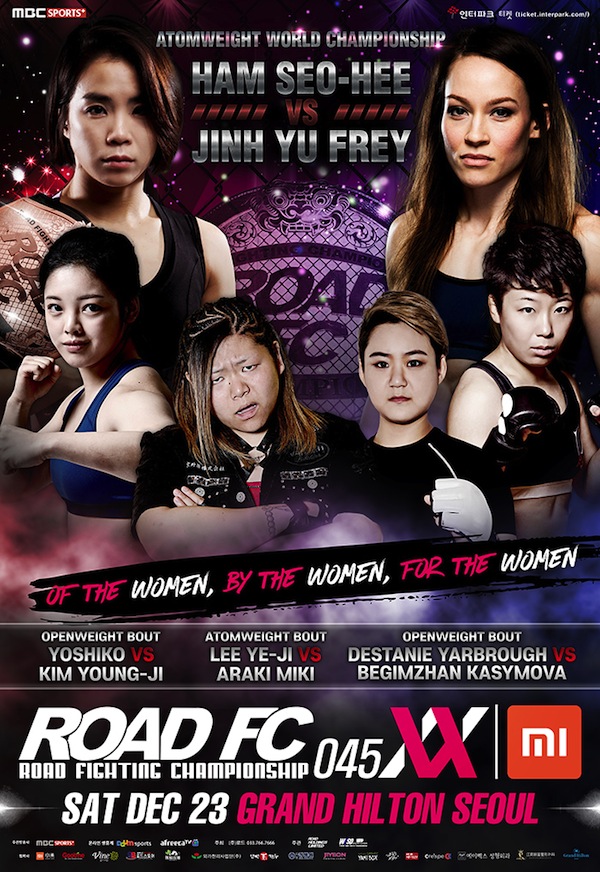 As previously announced, outstanding women’s professional wrestler from Japan, Yoshiko (2-0, SEAdLINNNG), will be making her third appearance in an MMA bout in the ROAD FC cage.

Kim Young-Ji (0-2, Team J) will be her next opponent. Kim competed in judo throughout high school, and then grew her MMA skills in the ROAD FC amateur Central League while competing in kickboxing. She made her professional debut in Japan’s DEEP against the current phenom King Reina, and followed up with a Shooto match against Sarah McCann. Although Kim has yet to win in her pro career, she’s not daunted by her next opponent.

Yoshiko versus Kim Young-Ji will show a very powerful young wrestler versus an hungry new judoka with striking skills in what should be a fast and brutal fight.

Destanie Yarbrough (1-1, Buhawee Muay Thai USA/ Halo Jiu-Jitsu) is an American Football player with a martial arts background in boxing and Muay Thai. She won her first pro MMA fight in just 33 seconds, then faced Gabi Garcia in Rizin. With massive striking she damaged, but the decorated Brazilian Jiu Jitsu black belt was able to secure a submission win.

Begimzhan Kasymova (1-0, NO MAD) of Kyrgyzstan is a Master of Sports in sambo, a 3-time national armwrestling champion, and a 2-time national boxing champion. She began boxing as a teenager for fitness, and it soon became a way of life. Begimzhan’s interest in MMA grew, so she began studying and had her first professional match just 3 months ago, winning by TKO in just over a minute.

Destanie Yarbrough versus Begimzhan Kasymova features two tremendously powerful and aggressive strikers who are going to showcase the excitement that the future of the women’s openweight division holds.

Plus, Lee Ye-Ji will make her final bout as a “High School Fighter” agains Japanese Araki Miki in what will be another exciting showdown to strengthen the women’s atomweight division in Asia.

And two former contestants in the $1 Million Lightweight Tournament are set to meet: Nandin-Erdene versus Rafael Fiziev is a pairing of two brilliant strikers who know how to entertain – and finish fights in devastating fashion.