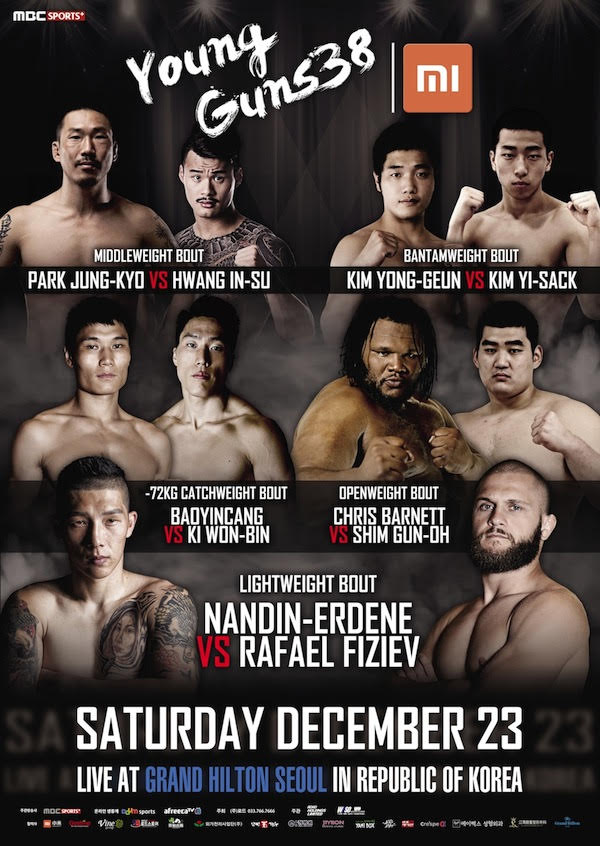 In a -72kg Catchweight Match is the return of former $1 Million Lightweight Tournament contestants Baoyincang (11-4, Xindu Martial Arts Club) and Ki Won-Bin (5-5, Team Posse). Baoyincang’s sanda base and durability has made him one of the biggest threats from China, with a very thrilling display of kicks. Ki has worked his way up from the ROAD FC amateur leagues through Young Guns to the Tournament, and has cemented his place as an exciting striker, do or die. With both fighters coming off losses, this will be a chance for Baoyincang and Ki Won-Bin to put in their toughest efforts and show off the skills they are known for.

In an exciting Openweight Match, the always entertaining Chris Barnett (15-6, Barnett Taekwondo Academy) makes his awaited return against standout wrestler and young prospect Shim Gun-Oh (3-2, Kim Dae-Hwan MMA). Barnett has impressed the fans with his stunning strength and versatility in the cage as well as his demeanor outside of it, though he’s experienced two difficult results against Myung Hyun-Man in ROAD FC. Shim was signed directly from the reality show “Crying Fist” as a standout young wrestler who had natural striking skill, and after hitting a rough patch, turned his training and focus around, ready to make his mark. Openweight fighters are always exciting, however Chris Barnett versus Shim Gun-Oh has the added elements of emotion and fan appeal to make this match even more engrossing.

In a Middleweight Match fan favorite “Special Force” Park Jung-Kyo (7-8, Black Bear Camp) will welcome hot prospect Hwang In-Su (2-0, Changwon KPW) to the deep end of the division. Park has fists of concrete, with a head and heart to match, whose every bout has gotten the fans on their feet. Hwang has announced himself as a new force with two knock outs ins a row by utilizing his reach, speed, and timing. In a match of experienced power versus youthful aggression, Park Jung-Kyo will bring the fight and Hwang In-Su will have his chance to prove himself with a big step up in competition.

Opening up Young Guns 38 will be Kim Yong-Geun (2-2, Team Finish) versus Kim Yi-Sack (1-0, Team Strong Wolf) at Bantamweight. Yong-Geun is a strong wrestler who has put in commendable performances with his grappling skills and good striking. Yi-Sack is a national Sambo champion hailing from the same team as standout female fighter Park Jung-Eun, who has gone 7-3 as an amateur in the ROAD FC Central League. Well-rounded prospects Kim Yong-Geun and Kim Yi-Sack are expected to produce a technical and fast-paced opening thriller.

Yoshiko versus Kim Young-Ji will show a very powerful young wrestler versus an hungry new judoka with striking skills in what should be a fast and brutal fight. Plus, Lee Ye-Ji will make her final bout as a “High School Fighter” against Japanese Araki Miki in what will be another exciting showdown to strengthen the women’s atomweight division in Asia. And, Destanie Yarbrough versus Begimzhan Kasymova features two tremendously powerful and aggressive strikers who are going to showcase the excitement that the future of the women’s openweight division holds.

In the Young Guns 38 preliminary card main match, two former contestants in the $1 Million Lightweight Tournament are set to meet: Nandin-Erdene versus Rafael Fiziev. It’s a pairing of two brilliant strikers who know how to entertain – and finish fights in devastating fashion.