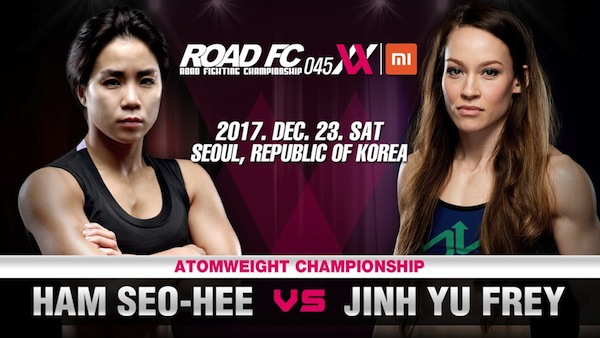 ROAD FC Atomweight Champion Ham Seo-Hee (18-8, Team MAD) is the current reigning, defending titleholder, and the pioneer for women’s MMA in South Korea. Ham made her debut in Japan’s DEEP with an impressive win over veteran Hisae Watanabe. She racked up a record of 12-5 with wins over V.V Mei Yamaguchi, Emi Fujino, and Naho Sugiyama, and was only finished twice in 10 years by the legendary Megumi Fujii and Invicta Atomweight champ Ayaka Hamasaki.

Ham debuted in ROAD FC in 2014 with back to back wins over Alyona Rassohyna and Shino VanHoose, then claimed the DEEP Jewels Featherweight title from Saori Ishioka. She made history as the first female fighter from South Korea in the UFC, with her debut against Joanne Calderwood awarded as one of the greatest strawweight fights of all time. After going 1-3 with the promotion, Ham returned home to Korea and to her proper weight class of 48kgs. Again she made history by winning the first ROAD FC Women’s Atomweight title by finishing DEEP champion Mina Kurobe in a thrilling battle.

Jinh Yu Frey (6-2, Genesis Jiu Jitsu HQ) is the former Invicta FC Atomweight title challenger and now top-ranked in the world’s first all-female MMA promotion. Although her Korean father was a Taekwondo master and a Moo Duk Kwan coach, it wasn’t until she was 22 that she got into combat sports with kickboxing. Frey transitioned from amateur to professional MMA through the top USA amateur promotion Tuff-N-Uff, and when she went pro she also went viral with her double-punch KO of Darla Harris.

While working a full-time job and getting her MBA, Frey climbed to the top of the women’s atomweight rankings with a win over Herica Tiburcio and a title challenge against Ayaka Hamasaki. Although the match was ended by a cut, Frey’s performance cemented her chance to rematch Hamasaki. However, first she rebounded with a win over Ashley Cummins. When Hamasaki moved up to strawweight, Frey became the top of the division. Frey’s well-rounded, technical style has gained a staunch following and made her a threat to everyone in the division.

ROAD FC Atomweight Champion Ham Seo-Hee versus Jinh Yu Frey is the world’s most important match in the division today. ROAD FC is committed to advancing women’s Mixed Martial Arts, and is proud to showcase two of the best fighters on the planet at Xiaomi ROAD FC 045 XX!

The next event will be Xiaomi ROAD FC 043 in Seoul, Korea on October 28th. The interim Middleweight title will be on the line as Korean veterans Kim Hoon and Choi Young “RYO” finally face each other. Former ROAD FC Champ Lee Kil-Woo returns after extended hiatus to take on The Outsider Champ Asakura Mikuru. And a third member of ROAD FC royalty sees former Lightweight Champ Nam Yui-Chul face Korean OG Jung Doo-Jae.

At Xiaomi ROAD FC 044 in Shijiazhuang, China on November 11th, the quarterfinals round of the ROAD FC $1 Million Lightweight Tournament will take place with 6 nations colliding: Shamil Zavurov vs Amartuvshin Khuukhenkhuu; Baoyincang vs Shimoishi Kota; Ronys Torres vs Tom Santos; and Mansour Barnaoui vs Nandin-Erdene. Final matches on the card will be announced shortly.