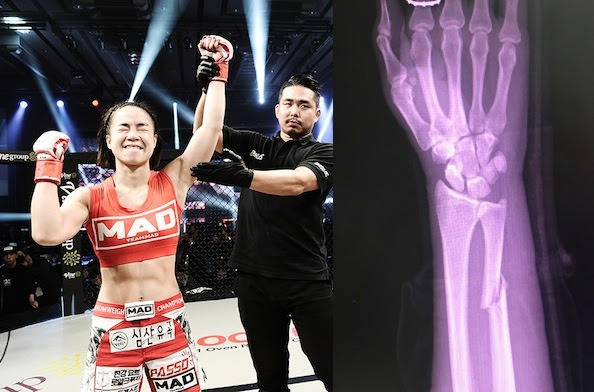 Atomweight Champion Ham Seo-Hee retained her belt and her position as the world’s top in the division by a first round TKO over Jinh Yu Frey. However, possibly in the process of the KO blow and hammer fists, Ham’s left radius fractured. It is the first severe injury of her entire career. Surgery will be performed, and Ham’s recovery is expected to be between 4 to 6 months.

Rafael Fiziev engaged in a short, brutal bout with fellow striker Nandin-Erdene. While he ducked and covered for most of the opening assault, it was Fiziev’s counter attack in which he did the damage to himself of breaking the index metacarpal on his right hand. Fiziev has already undergone successful surgery, and his recovery period will be 3 to 6 months.

Previous article
Five UFC fighters who can win the world title in 2018
Next article
According to Chael Sonnen, Rafael dos Anjos Won’t Get the Shot at Tyron Woodley