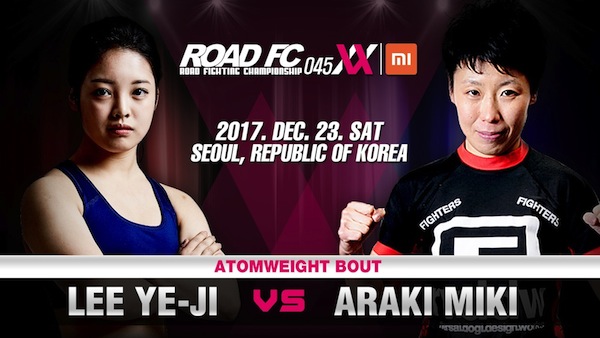 “High School Fighter” Lee Ye-Ji (3-3, Team J) started her professional MMA career at just 16 years old and experienced 6 matches in 3 countries against the stiffest of competition. She has faced massive veterans Hisae Watanabe and Satoko Shinashi, avenging her first loss to Shinashi as the co-main event on the first all-female ROAD FC XX card. Lee narrowly lost a split decision to Araki’s teammate Tomo Maesawa in her most recent outing, and the match showed her exactly what she needs to work on.

Araki Miki (5-2, Reversal Gym Tachikawa ALPHA), also known by her Chinese name Pan Hui, is riding a 2-fight win streak as she makes her debut match in ROAD FC. After losing a decision to warhorse Emi Tomimatsu, she rebounded at DEEP Jewels 17 and then with a great win over Izumi Noguchi at Grandslam 6. Araki will not be an easy follow up for Lee, as her grappling skills will test the young prospect.

Lee versus Araki will be another exciting showdown to strengthen the women’s atomweight division in Asia!

Plus, outstanding women’s professional wrestler from Japan, Yoshiko, will be making her third appearance in an MMA bout in the ROAD FC cage. And two former contestants in the $1 Million Lightweight Tournament are set to meet: Nandin-Erdene versus Rafael Fiziev is a pairing of two brilliant strikers who know how to entertain – and finish fights in devastating fashion.

Previous article5 Exciting Reasons Why You MUST Watch ‘One Championship: Immortal Pursuit’ This Friday
Next article10 Indian Fighters who can follow Bharat Kandare to the UFC