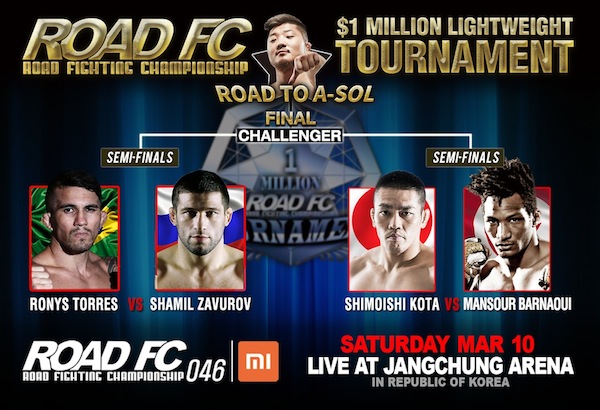 Ronys Torres (36-5, Nova Uniao) is the Shooto Brazil Champion. In the Tournament, he submitted Ermek Tlauov, Russia Trials winner Elnur Agaev, and Tom Santos all within the first round to make it to the Semifinals. Torres is a superior grappler and has a finish rate of 80%.

Shamil Zavurov (34-5-1, Akhmat Fight Club) is the Octagon FS Champion. In the Tournament, he defeated Kim Wong-Gi, Leo Kuntz, and Khuukhenkhuu Amartuvshin all by decision to make it to the Semifinals. Zavurov has relentless takedowns and grueling wrestling.

Torres likes to show off his superb technique to get the finish, while Zavurov is willing to grind his opponents down round after round. This Semifinals match will be a contrast in styles between the best lightweights from Brazil and Russia.

Shimoishi Kota (21-4, Shooto Gym Blows) is the former DEEP Lightweight title challenger and Japan Trials winner. In the Tournament, he submitted both Park Dae-Sung and China Trials winner Bao Yincang to reach the Semifinals. Shimoishi is at the top of his career by overwhelming his opponents on the ground.

Mansour Barnaoui (16-4, Team Magnum) is the former M-1 and BAMMA Champion. He has first round submissions over Ki Won-Bin, Kim Chang-Hyun, and Nandin-Erdene to reach the Semifinals. Barnaoui is a young phenom with excellent timing and flawless grappling.

Shimoishi quickly engages to get the fight to the ground, while Barnaoui looks for the opening to finish in any position, standing or grappling. Power, timing and technique will all be on display in this Semifinals match.