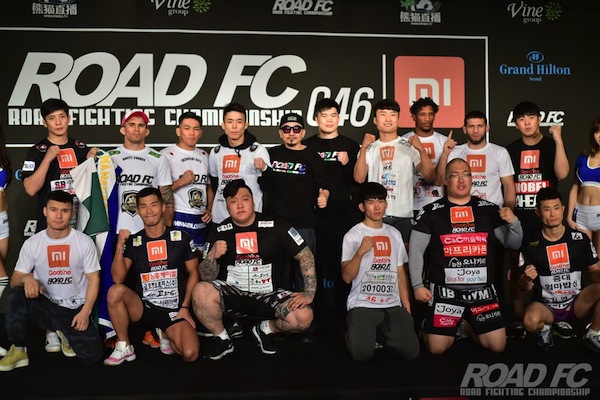 In the main event, the contenders bout for the next chance to face ROAD FC Champion Choi Mu-Gyeom, both Kim and Lee came in on weight.

Lee, “I’m thankful to ROAD FC for the opportunity, I did my absolute best to prepare for this fight.”

Kim, “It’s questionable if we’re famous enough to be headlining the main event, but I take it as an opportunity to show the best performance possible so I will do my best.”

All four semifinalists made weight and both matches are green lit.

Zavurov, “Everyone knows Torres is a great fighter and I prepared accordingly. I will show my best performancetomorrow. I believe everyone in the final four including current champ A-Sol Kwon are exceptional fighters but in the end I see myself winning the championship belt.”

Torres, “I respect Zavurov, I know he is a great fighter but I believe tomorrow’s victory belongs to me.”

Barnaoui, “I feel great, I put in a lot off effort into preparations for this fight. I want to keep my strategy classified for the moment but I will be able to neutralize my opponent.”

Shimoishi, “I am in great condition as well. I have prepared a fight that Korean fans will love. Barnaoui is an extremely dangerous fighter but I believe in my team and the preparation I put in for this. My strategy is also a secret, you’ll seetomorrow.”

Battle of the TV Stars: Crying Fist vs Fearless Guys

Eom Tae-Woon, “I’m sorry I missed weight and I thank Hong for staying with the fight even though I wasn’t able to make the promised weight.”

Hong Young-Ki, “This stage is a stage of dreams, but my opponent seems to have disrespected the MMA stage by not taking this seriously enough and missing weight by seven kilograms. I will show him that this opportunity is not to be taken lightly.”

Moon Jin-Hyuk, “I was worried about Park because he showed up a little late. I heard he’s been getting intravenous drips during these weight cuts.”

Park Hyung-Geun, “I took too much weight off so my voice is a little funny but tomorrow, my opponent will be the one who will need a trip to the hospital for an intravenous drip. He keeps on talking that kind of trash but it’s just all talk. I should peg him in his lips. He’s a disgrace to MMA”

Heo Jae-Hyeok, “Hello, I’m the openweight fighter from FEARLESS GUYS… I am very excited and I will knockout my opponent tomorrow night.”

Jang, “I fought in the flyweight and bantamweight division and I will win the fight tomorrow and continue to fight in this division”

Alatengheili, “I’m going to stay in this division and tomorrow I will kick his ass.”