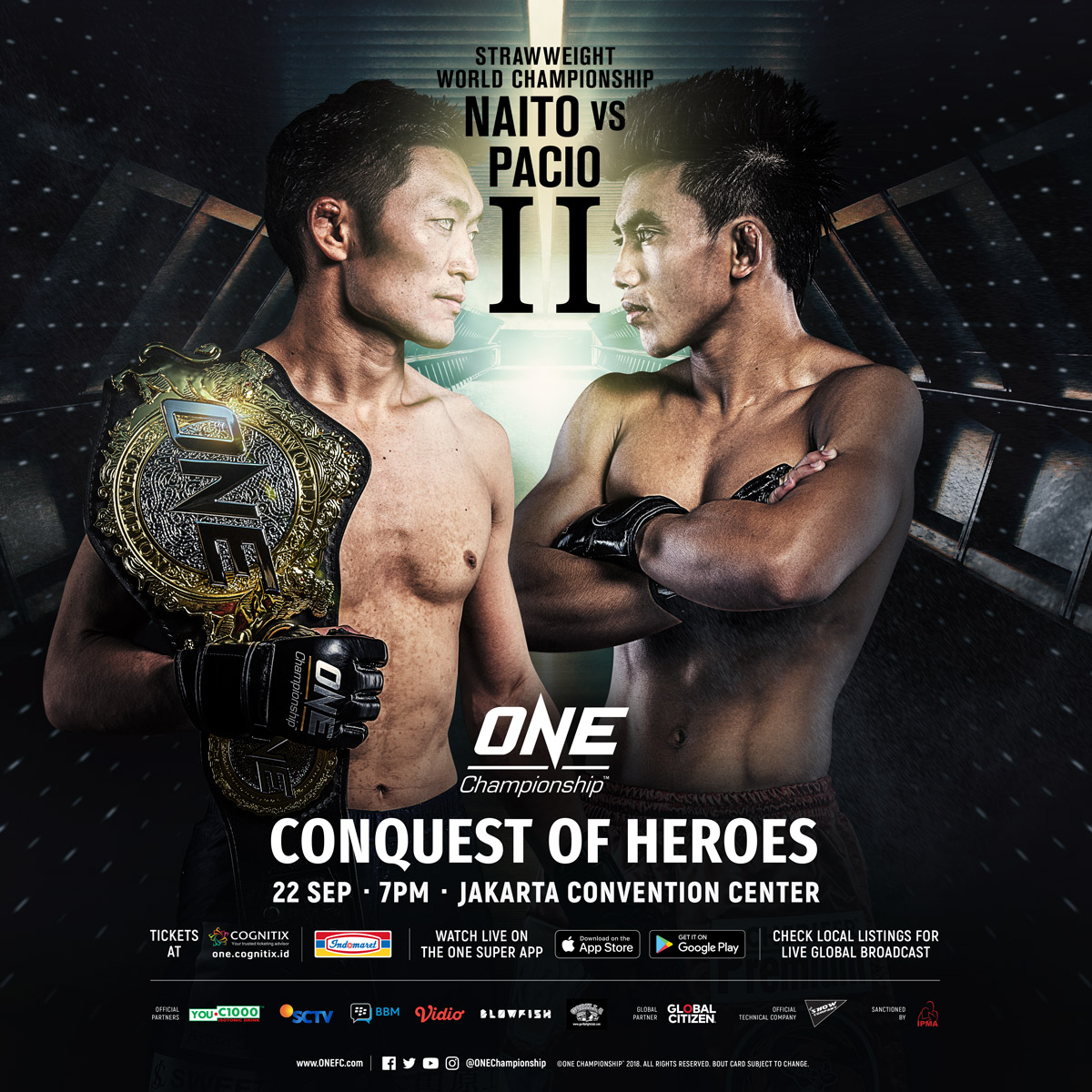 17 August 2018 – Jakarta, Indonesia: The largest global sports media property in Asian history, ONE Championship™ (ONE), has just announced its return to Indonesia’s bustling capital city of Jakarta. The Jakarta Convention Center will once again play host to another exciting evening of world-class martial arts action. ONE: CONQUEST OF HEROES, set for Saturday, 22 September will see the biggest and brightest stars take to the ONE Championship cage to showcase their incredible skills. In the main event, reigning ONE Strawweight World Champion Yoshitaka Naito of Japan will defend his title against rising star Joshua Pacio of the Philippines.

Ticket information for ONE: CONQUEST OF HEROES is available at www.onefc.com.

Reigning ONE Strawweight World Champion Yoshitaka “Nobita” Naito is one of the most successful martial artists to ever emerge from Japan. In just four short years since debuting in 2012, Naito conquered the notoriously competitive Japanese martial arts scene, capturing the Shooto Strawweight Title. Since making his ONE Championship debut in 2016, Naito has captured the ONE Strawweight World Championship on two occasions, defeating former champions Dejdamrong Sor Amnuaysirichoke and Alex Silva. Naito is now set to defend his title against former opponent Joshua Pacio in an epic rematch.

Former ONE World Title challenger Joshua “The Passion” Pacio of Baguio City, Philippines was inspired to take up martial arts ever since he was 12 years old. After an undefeated amateur career, Pacio soon made his professional debut, where he went 6-0 before making it to the global stage of ONE Championship. In 2016, he got his chance against reigning ONE Strawweight World Champion Yoshitaka “Nobita” Naito, falling just short of victory. Now riding a three-bout winning streak, Pacio has earned a rematch against the champion, and will now face Naito for the ONE Strawweight World Championship.

23-year-old Yuya “Little Piranha” Wakamatsu is a mixed martial artist from Kagoshima, Japan. Holding a professional record of 10-2, Wakamatsu is an aggressive knockout artist with shocking power. With nine of his 10 victories coming by way of knockout, Wakamatsu is a force to be reckoned with at flyweight. A winner of 10 of his last 11 bouts, Wakamatsu has decided to take his talents to the ONE Championship cage. He makes his promotional debut against Danny Kingad.

Danny “The King” Kingad, a premier flyweight talent from the famed Team Lakay of Baguio City, is a wushu champion with a professional record of 10-1. A true warrior from the mountains of the Philippines, the 22-year-old is a tremendous striker who possesses well-rounded grappling skills. In November 2017, Kingad challenged reigning ONE Flyweight World Champion Adriano Moraes, and fell short in his quest of capturing the world title. In his most recent bout, “The King” moved forward by defeating rising Chinese star Ma Hao Bin by unanimous decision. Up next, he returns to action against newcomer Yuya Wakamatsu.

Former ONE Flyweight World Champion Kairat “The Kazakh” Akhmetov was inspired by his father, an amateur champion in Greco-Roman wrestling. Akhmetov began training in martial arts in 2000, and proved to be as talented as his father, eventually becoming a three-time National Greco-Roman Wrestling Champion. Akhmetov then joined ONE Championship in 2015, shocking former flyweight champion Adriano Moraes to capture the title. He eventually surrendered the belt back to Moraes in a rematch and has since been on a quest to return to title contention. Akhmetov can get one step closer to his goal if he can get past his next opponent, Ma Hao Bin.

“The Southern Eagle” Ma Hao Bin is unbeaten in ONE Championship. Ma, a Chinese national freestyle wrestling champion, made his professional debut in January 2016, where he defeated Wu Ting Shen and Bu Huo You Ga in a single evening of action to claim the ONE Changsha Bantamweight Tournament Championship. Since then, the 24-year-old has strung together an impressive 11-3 professional record, which includes four wins by submission and two by knockout. Ma now returns to action against Kairat Akhmetov.

Former SEA Games Wushu Bronze Medalist Priscilla Hertati Lumban Gaol began training in wushu at the age of 17, after taking up an opportunity to compete for the Indonesian national team. She was highly successful in this regard, capturing both an Indonesian National Wushu Championship and a local boxing title. She even won a bronze medal in wushu at the Southeast Asian Games, with her striking success spurring her towards a career in mixed martial arts. Lumban Gaol is set to face Jomary Torres in her next outing.

Undefeated Filipino talent Jomary Torres is from Sindangan, in the Zamboanga del Norte province of the Philippines. With an unblemished professional record of 4-0, Torres currently sharpens her skills under the watchful eye of famed Filipino wushu world champion, ONE veteran Rene Catalan. Torres is riding a wave of momentum, having won the first four bouts of her career, including three inside the ONE Championship cage. In her most recent outing, Torres stunned Team Lakay star April Osenio to win by first round knockout. Her next assignment is against Priscilla Hertati Lumban Gaol.

Besides capturing the IBC Featherweight Championship, Victorio Senduk competed in wushu at the Southeast Asian Games, medaling in 2007 and 2011. He first began training in karate at age 14, and within three short years, proved talented enough to become a professional martial artist. His run of success in the cage as well as in the wushu arena brought him to the attention of ONE Championship, and he soon achieved his dream of competing on the global stage by making a successful debut at ONE’s inaugural Indonesia event in 2012. He now faces off against the veteran Sunoto.

WKF Indonesia Champion “The Terminator” Sunoto is from East Java, but moved to Jakarta in 2012 to pursue his martial arts dreams. He first started training in taekwondo as a child, but soon picked up other disciplines while travelling around the country to compete in several tournaments. Besides becoming a regional sanda champion, Sunoto also currently holds the rank of brown belt in traditional Japanese jiu-jitsu, and is a member of the Indonesian national sambo team, belying his growing all-around skills. Sunoto signed with ONE Championship in 2015, and has since put on many thrilling displays. Sunoto will take on Victorio Senduk in his next outing.