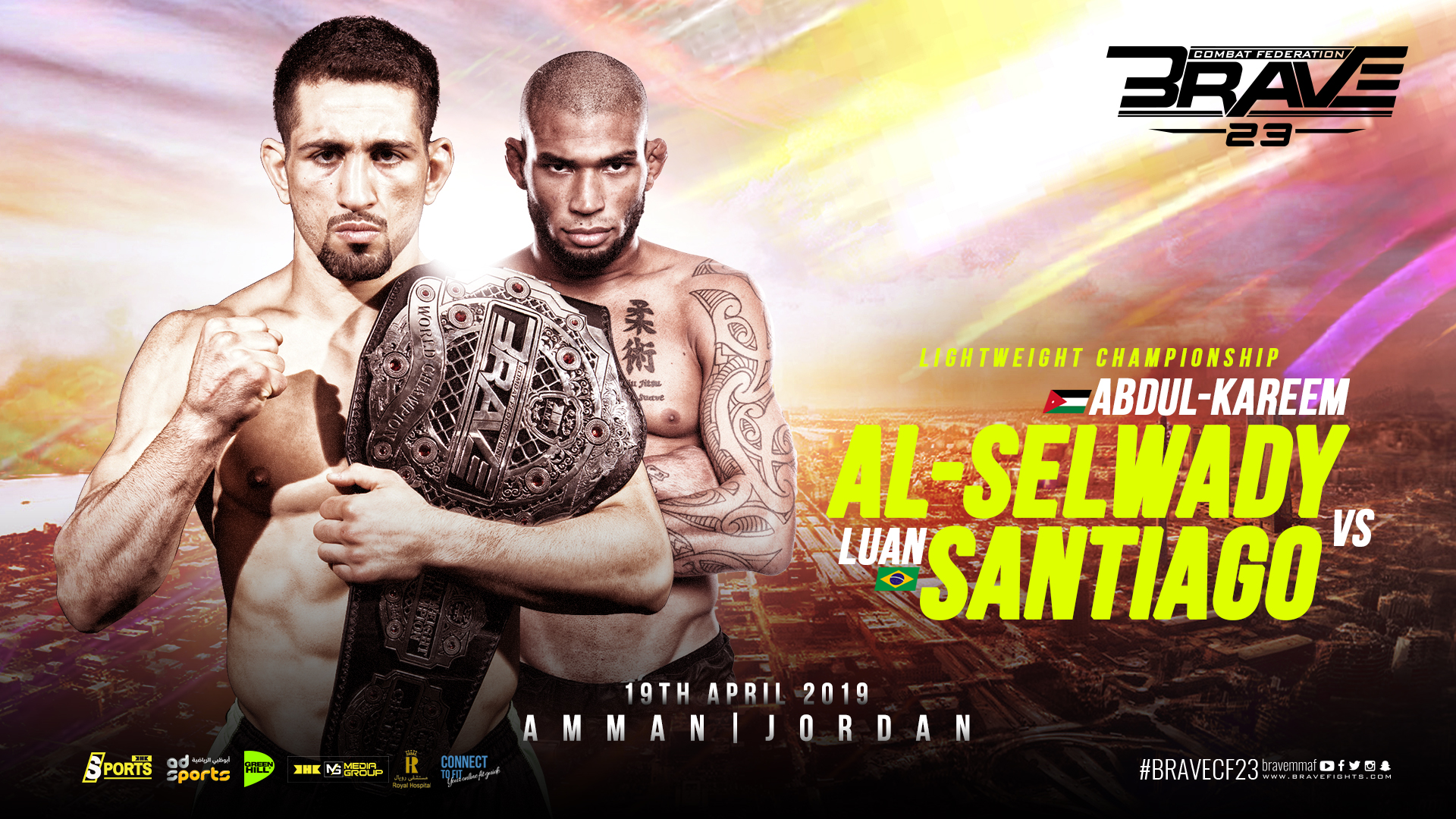 Abdul-Kareem Al-Selwady and Luan Santiago are two of the best young talents in the world of MMA today. They will fight for Al-Selwady’s world Lightweight title at Brave 23, on April 19th, in Amman, Jordan, in a battle that has been long targeted by fans and media alike.
Both Abdul-Kareem and Luan have been deemed as proof of Brave CF’s impact in MMA all over the world. Hailing from Jordan, “The Pride of Palestine” was a Middle East champion before climbing up the step towards a world title. The same can be said about Brazil’s “Miau”, who was the recipient of 2016’s Brazil Fighter of The Year award right before signing with Brave.
Al-Selwady started off his promotional career with a submission victory in the main event of Brave 1. After that, he won another three fights, which gave him the opportunity to fight for Lucas Mineiro’s belt. In a dominant performance, he put away the veteran Brazilian in the first round, shocking the world of MMA, and firmly establishing himself as one of the best fighters in the sport. 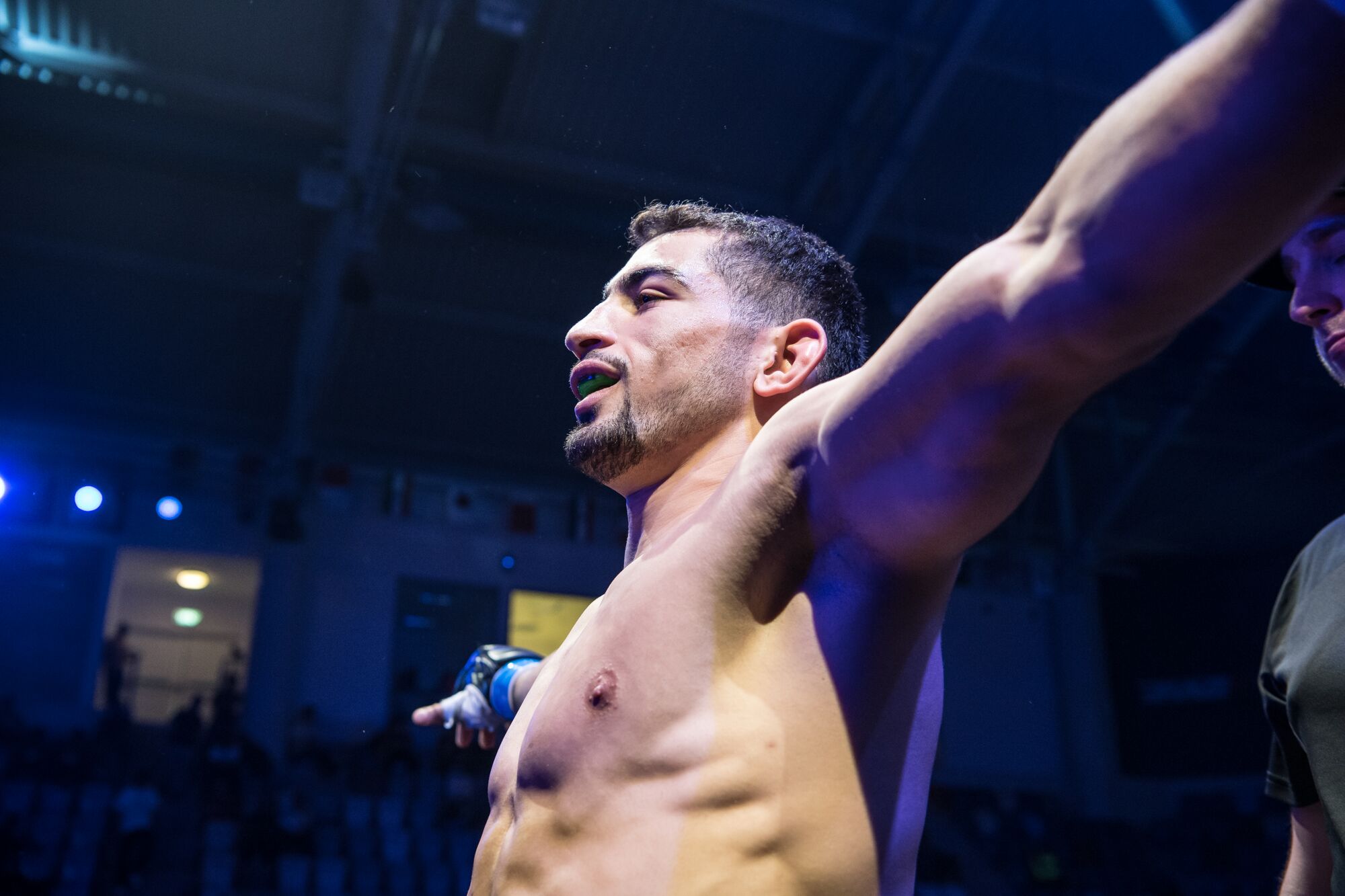 After going through many different coaches in Jordan and in the United States early in his career, “The Pride of Palestine” has found a home at Fortis MMA, in Texas.
He is currently one of MMA’s most well-rounded fighters. A competent striker with a great wrestling base, Al-Selwady is able to dominate his opponents exploring their weak areas and maintaining his discipline throughout the bout, never deviating from the gameplan.
When he fought striker Charlie Leary, the Jordanian hero was able to use his wrestling skills to lay a beating in the Englishman, who barely survived the three rounds. Before that, he faced grappler Erick “Indio Brabo”, who was unsuccessful in his attempts to take the fight to the ground, succumbing to a second-round TKO.
He will need all of his multiple weapons when he takes on Brazil’s Luan Santiago. One of MMA’s most unorthodox strikers, “Miau” has made waves since his Brave debut. His first two fights with the promotion ended in incredible first-round KO’s. When faced with friend Lucas Mineiro, he proved his doubters wrong with a patient approach, showing his cardio is indeed one of his greatest weapons. He was winning the fight but ended up injured from a late takedown.
However, “Miau” bounced back with a dominant performance against Djamil Chan, winning a unanimous decision to position himself as the number one contender for Al-Selwady’s belt.
Luan has been recognized as one of the best strikers coming out of Brazil, but he’s also an accomplished jiu-jitsu player. He trains with legendary coach Cristiano Marcello, in one of the best MMA gyms in the country, CM System.
Will Al-Selwady choose to stand and trade with the striker Luan, or will “Miau” have trouble trying to maintain the fight standing?