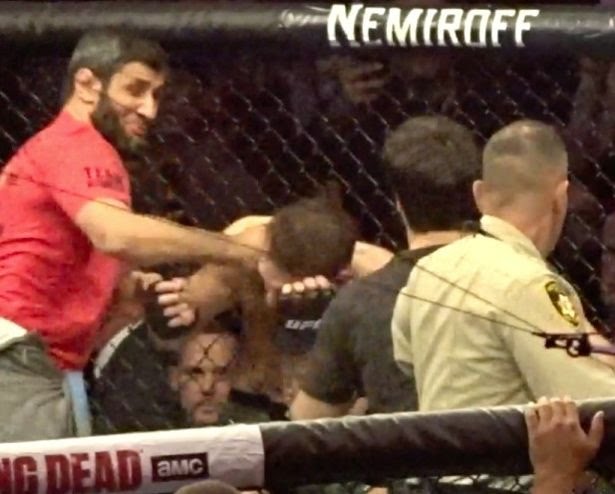 One of the three members of Khabib’s entourage who attacked Conor Mcgregor last night has taken to social media to brag about the unfortunate events that went down previously.

Zubaira Tukhugov, 27, jumped over the wall of the Octagon and landed several punches on Conor from behind. The whole event was sparked when, after defeating Conor convincingly, Khabib launched himself outside the cage to initiate an ugly brawl with Mcgregor’s Jiu-Jitsu coach Dillon Danis.

Tukhogov posted a video on social media and said: “I slapped him as promised. I promised to make him answer for his words and I did.”

UFC fighter Zubaira Tukhugov is bragging on social media about attacking Conor McGregor at #UFC229: “I slapped him as promised. I promised to make him answer for his words and I did." pic.twitter.com/Iy2QYlUmEt

However, later it became clear that it was Conor who threw the first punch, generating a chaos inside the ring. Regardless of that, Khabib’s teammates ganging up on an already tired Conor has largely generated negative views and even led to their arrest by the police. But since Conor refused to press charges, the trio was set free.

Zubaira and Conor even had a bit of history. During the build-up to the fight, Conor tagged Zubaira as a traitor for supporting a Dagestani to hit a fellow Chechen, Artem Lobov.