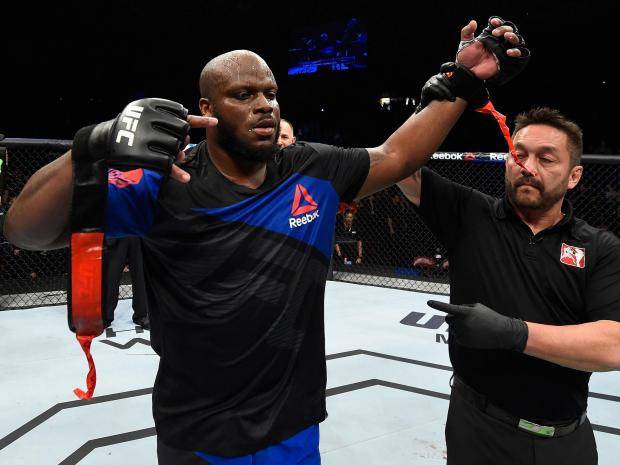 “I’m getting married next week,” Lewis said at the time. “I don’t like putting my family through all of this, so this could be my last fight. It’s most likely my last fight in the UFC.”

“It’s just because I needed some time off, man,” he told MMAjunkie on Tuesday while watching open tryouts for “The Ultimate Fighter 27” in Las Vegas. “I was fighting way too much. My mind wasn’t right. I was having trouble at home, like just arguing all the damn time for stupid (expletive). So I just needed some time off.

“I got the time off, and I believe I’m ready to go now.”
“I believe all the time it’s 80 percent mental and 20 percent physical. I say that all the time. It’s true.”

However, after undergoing therapy and rehabilitation, which included stretching work, Lewis started feeling like his old self. He could even put his
“legs behind my head and stuff like that” – proof he had made progress (in the cage and at home).

“It’s been pretty good,” said Lewis, who’s one of the UFC’s bigger jokesters. “My wife likes that. We’re trying different moves in the bedroom. …

“I went to the (Onnit Academy Gym) out there in Austin, and I believe they really fixed my back, so we’ll see. Training has been going good. I feel like I’m in shape right now, so we’ll see when Feb. 19 comes around. …

“Right now, I’m feeling pretty good. My back is good. It’s been like six days and counting that I’ve had no back issues at all.”

“The past few months, they have been depressing a little bit – seeing other guys rise, and I’m still in the same position I’m in,” said Lewis, who had won six straight fights (five via knockout) before the Hunt defeat. “You know, the opportunity is there. The heavyweight division is wide open. A lot of guys have been getting popped for steroids and stuff like that, and it’s moved me in a position with a pretty good spot to a title shot pretty soon.

“I believe two good wins against decent opponents, and a title shot is right around the corner.”

“It’s going to be an interesting test for me, but I believe I’ll get the job done,” Lewis said. “I promise you I can.”