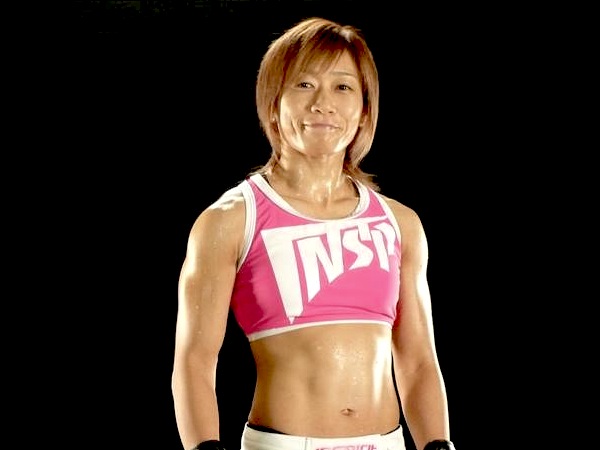 “Mega Megu” Megumi Fujii (26-3 retired, AACC) is one of the greatest female MMA fighters on the planet. There was a strong community of women in Japan’s early MMA scene, but Fujii distinguished herself both at home and abroad against Japanese and foreigners alike.

In her first 22 fights, Fujii went undefeated in Shooto, Smackgirl, BodogFight, Jewels, and Bellator. In those fights, she finished all but three by submission except for her first TKO finish in Bellator against Sarah Schneider.

Fujii competed at the highest level of the sport from 2010 to 2013 and only suffered three losses – all by decision – to Ziola Gurgel and Jessica Aguilar. Aguilar was her final opponent in VTJ, and while it was a disappointing finish because of eyepokes that obviously hampered her ability, Fujii still retired as an incredible athlete who had never been finished in her entire career.

Aside from MMA, Fujii has claimed a brilliant success in other combat sports. She was Runner Up five times in the World Sambo Championships, BJJ Pan-Ams Champion in 2006, and twice bronze medallist in the ADCC Worlds.

Fujii is now in a new chapter of her life. She supports and corners her husband Sasaki Shinji in his MMA career with ROAD FC. Therefore, Fujii has been in a position to see the new female MMA talent growing in Korea as well as Japan. ROAD FC is proud to have Fujii’s support for the first all-female league, ROAD FC XX.

Fujii shared her views on the development and future of women’s MMA:

“MMA is not merely for strong men, it is a sport where women and children can challenge themselves.  The recent success women have had demonstrates that everyone can work hard to strengthen themselves. I think that this is wonderful.

“Our existence grew from a time when nothing about women’s MMA was certain or confirmed. I think that the strong state of women’s MMA has grown from that time of struggle. I think that it is getting close to equality with men, but the female fighters will change that much more! I think that they can do even more if they keep believing day after day and hone their skills. I am really happy to see the girls fighting while shining!”

“Congratulations on the first ROAD FC XX. By holding this tournament, I think that the number of female fighters aiming to come here will increase and it will get very exciting. I think that it will be even more popular and I think that a star will be born.

“For women fighters, isn’t it a wonderful hing to be the focus and stars of an entire event?  Women’s MMA is getting popular all over the world now, but I think that women want to show even more excitement so that we can make it even greater.”

“In Korea, there is a wonderful fighter named Ham Seo-Hee, so I want everyone to keep watching and supporting! I am looking forward to the future of female fighting sports! I appreciate ROAD FC XX.”

Previous articleA case of AKA and its pull out merchants, and why Khabib will likely never fight Conor McGregor
Next articleFights to make after UFC 209