Indian MMA fighter Srikant Sekhar was violently attacked by the Afghan MMA fighter Abdul Azim Badakshi at the Matrix Fight Night 9 event which took place at the Siri Fort Stadium in New Delhi last Friday. It was one of the best fight cards ever to take place in India and under the banner of Matrix Fight Night. It was a night of great fights and also one of the highest moments for Indian MMA. However, what unfolded later that night was easily the darkest moment for the sport in India and it has put a dark stain on the sport.

MMA is still at a very nascent stage in India and such incidents put a bad image in the mind of the average Indian at a time when the sport is looking for relevance and support from the masses. Srikant Sekhar fought at Matrix Fight Night 9 against Sumeet Khade. Check out Hong Kong betting sites.  He won the fight via D’Arce choke submission. Following the fight, he called out Afghan fighter Zahoor Shah who was also fighting on the same card against Seth Rosario (Seth is Srikant’s teammate).

Later on the night, Seth Rosario defeated Zahoor Shah via TKO in the first round but there was some controversy about how the fight ended, which has been cleared now and fans can read the details here. 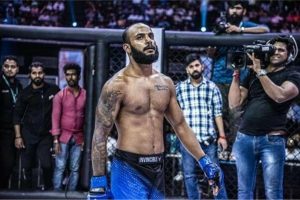 How Abdul Azim Badakshi led a mob against Srikant Sekhar?

The fight between Seth Rosario and Zahoor Shah was also the final fight of the night and that’s when things turned to the worst. The MMA India Show had the opportunity to chat with Matrix Fight Night commentators Rahul Chhabra and Mannan Dutta to talk about the whole incident.

“What Abdul Azim Badakshi and Afghan fans have done is utterly shameful and with this I think they have gotten a nationwide ban. If Abdul is still not apologetic, he should be banned globally. His entire fight record should be revoked and he should be banned from Global MMA because you cannot be sucker punching somebody and leading a mob and chasing an Indian fighter who is there to put up a show and he didn’t say anything bad. You can’t be chasing him to kill him. This was an attempt to murder and mob lynch because with the videos coming in, you can See the mob is running after Srikant. There were also Afghani kids, who were part of this mob. There were Instagram Stories where they are showing that they’re proud and they wanted to kill him. So this shows their intent was to kill Srikant and whoever came in their way was hurt. His head coach Ashwin and the other coach Mohit was also attacked. AIMMAA officials present there were also attacked. Because they were trying to save Srikant and then Abdul Azim Badakshi had the audacity to attack the officials also. What kind of professionalism is this?,” MFN commentator Rahul Chhabra said.

“Abdul Azim Badakshi was sitting along with the VIPs on the Sofa and fans were seated in their stands. There were two stands, one was the normal seating and the other was the privileged one where the families of the fighters and officials were seated. The entry was all via passes, so Abdul was sitting on the VIP sofa right next to the promoters. The narrative that the Afghan guys are giving is that Srikant abused them… Srikant was just building up the fight, but later on, the video clearly shows that the Afghan fans were abusing him and now just because they are in trouble, they’re using a fake narrative. So even if Srikant abused, maybe showed them middle fingers, it doesn’t give anybody the authority to kill him,” he continued.

“Therefore the Indian MMA community stands united to safeguard Indian MMA from such hooligans. Thanks to the officials, who took the situation into control, they acted immediately the moment they saw that Srikant was getting beat up by Abdul and the fans started jumping in. A couple of officials went in and started saving Srikant and started moving him out of the venue. At the same time, a couple of officials went and they were trying to control Badakshi and a couple of Officials joined the bouncers and made a human wall this also included my Co-commentator, Mannan Dutta. He joined hands with all the bouncers and made a wall between the crowd and the promoters. The next team safely made way for the promoters to safely make their way inside the cage. So the team acted so fast that the cage was safeguarded by the officials. Everybody from the promoters to kids, to the ladies, were escorted to the cage safely. So kudos to all the Officials for controlling the situation.”

“If they hadn’t controlled the situation, they would have been a loss of life. It could have been my family as well as they were there in the attendance and these things actually bring a bad name to the MMA, which is still not perceived as a sport in India. So these kind of incidents bring a lot of criticism to our sport and I strongly condemn it. But it was still not enough for the mobs. The Afghan guys went so crazy they started misbehaving with people. One female fighter was standing there and she was attacked by the mob from behind. They stole Mohit’s phone (Coach of Srikant Sekhar) and the same mob was clicking the photographs of Krishna Shroff’s legs. This is sick behavior and all of this was led by Abdul Azim Badakshi and nobody else,” Rahul Chhabra concluded.

The MMA India Show also reached out to Mannan Datta to get his take on the incident as not only was he the commentator present cageside, but he also took the initiative to join the bouncers in creating a human chain around the promoters to safeguard them from the mob.

“So my specialty in Martial Arts is self-defense and so whenever there’s violence nearby, I am wired to perceive it faster than other people. I realized that something is happening and I just ran towards that to see if I can help in anyway. The first thing we did was to get Srikant out of the stadium because he was literally chased by 40 to 50 people. Then the second thing we did was that there were 8 to 10 bouncers present in the Arena and there were fighters like Dhruv Chaudhary. So we made a shield around Krishna, Ayesha, and a couple of other ladies and we escorted them out to their cars and even there we were surrounded by 40 to 50 people. So we had a circle around the girls and around the circle, there was a bigger circle of the Afghanis, so that way we escorted them to their car.

“Had Srikant not been escorted at the right time, he could have been killed by the mob,” Mannan Dutta said.

The MMA India Show owner Parvin Dabas also chimed in on this whole incident in a recent interview with Times Of India.

Afghan MMA fighter Abdul Azim Badakshi holding two passports, Afghani and Indian and having made an Aadhar card (god knows how) is attempting to flee tonight…not sure if FIR has been filed yet by @DelhiPolice am being told same is being done under bailable offences pic.twitter.com/kIQVUIFxJp

“Abdul needs to be caught. We need to stop him from leaving the country. I seek justice for Srikant Sekhar. All I am trying to do now is to create awareness on this. I want to make sure that justice is served at the end of the day. I’ve been in touch with Srikant. He’s having problems speaking. And yet, he sent his statement on video even in that condition. If you see the videos from that night, you will know how ridiculous this was. It was chaos. Ayesha has assured us in her statement that she has banned Afghan fighters from her show but this man is still at large, which is worrisome. I think this alarms me; we could disagree on things but beating someone like this? Abdul Azim Badakshi calls himself a lion but which lion attacks a lone man with a 50-strong mob?”

Srikant Sekhar has filed an FIR against Abdul Azim Badakshi. We will update again with more details.