Super Fight League: UP Nawabs gets a huge win over Gujarat Warriors 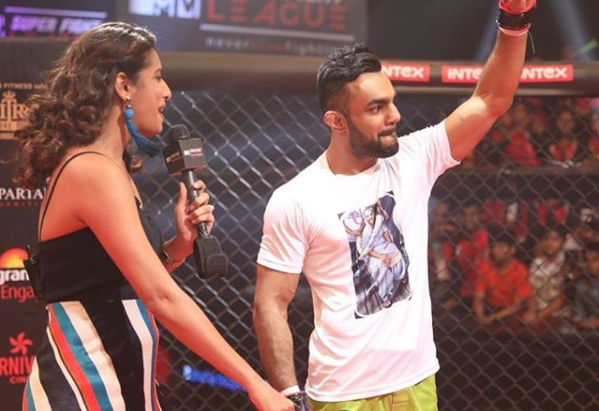 UP Nawabs off to a flying start

Gurdarshan Mangat made his Super Fight League Season 2 debut when he went up against Kuldeep Shekhon in a Bantamweight showdown. In what was the opening fight of the night, Mangat dominated throughout and he ended up picking the win via a first round ground and pound.

In the post-fight interview, Mangat dedicated the win to his grandmother and reiterated his desire to win the championship this season. Mangat’s win also gave UP Nawabs a solid start on the points table.

The second fight between Angad Bisht and Pradeep Hooda was much more competitive. The first round was a to-and-fro affair where both the fighters had their moments.

The pace slowed down in the second but Hooda got a slight advantage in the round thanks to some good show on the ground. It was once again a 50-50 storyline in the last round and in the end, it was Bisht that got the decision win for UP Nawabs.

Kiran then secured the third straight win of the night for UP Nawabs when she TKO’d Sonom Zomba in the first round. Kiran landed her signature hip toss in the start itself and had a strong grip on Sonom’s neck as a result. The hold remained intact until the referee stopped the fight almost halfway through the first round after Sonom’s arm was apparently injured.

David Moon bounced back from the defeat in his last fight by getting a first-round submission win against Manas Daimatry. Although Manas showed glimpses of a potential upset, the experience of Moon proved to be the difference and the win catapulted Nawabs to a 16 point lead in the matchup compared to zero of Gujarat Warriors.

The fifth fight of the night between Abdul Sami and Justin Jaynes had a controversial end when referee Alan Fenandes disqualified Sami for fence grabbing. Alan had warned Sami about grabbing the fence once and when the same was repeated once more, the fight was stopped citing the disqualification.

The win gave Gujarat their first points of the night as well. But it proved to be a mere consolation heading into the last fight.

Jason Radcliffe and Sumit Rangi were last on the night’s fight card and after a cautious start, Radcliffe managed to force Sumit to tap through punches. The win underlined the dominance of UP Nawabs in the matchup. The final score stood 20-6 in favor of the Nawabs.