The UFC will be returning to Canada on October 27th and for the first time ever they will be touching down in the city of Moncton and lot of mouth-watering match-ups are scheduled for the fight night. A battle in the women’s bantamweight division has been reported by Combate for UFC Fight Night Moncton as Sarah Moras will face off against Brazilian Talita Bernardo.

Bernardo is currently winless under the UFC banner, having dropped bouts to the duo of Marion Reneau and Irene Aldana. Bernardo made her professional MMA debut in 2015 and fought four times that year, picking up a 3-1-0 record. 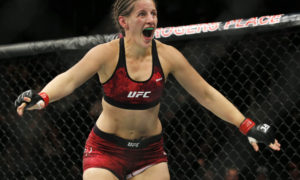 Sarah Moras will enter with a record of 5-3 and most recently suffered a unanimous decision defeat to Lucie Pudilova at UFC Fight Night: Cowboy vs. Medeiros. Moras had confirmed she’d signed a new contract just a few days ago.

“It’s always a bit of a struggle,” Moras told Frightful’s James Lynch earlier this year in regards to cutting weight to make 135. “I really want to move up a weight class. It seems they are really not trying to build that division. It’d be nice if they started to.

“I feel like the more I work out, the more muscle I get, the harder it is to make weight because I’m bigger. Leaner but weight the same or more. So, it’s always a struggle for me.”

UFC Fight Night 138, as UFC Moncton, is headlined by Frankie Edgar vs. The Korean Zombie in a key featherweight fight.