UFC:Eddie Alvarez claims that he’s the only man who can beat Khabib 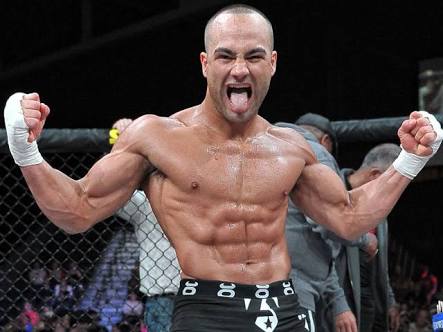 April will serve as a paradise for UFC’s Lightweight division fans.During the span of three event namely UFC 223,UFC on Fox 29 and UFC Fight Night in Atlantic City will feature a whooping eighteen lightweights,out of which ten fighters have a number ahead of them as they belong in the list of UFC rankings.

UFC 223 will witness probably one of the best lightweight match ups ever in history of the sport as interim champion Tony ‘El Cucuy’ Ferguson will fight contender Khabib ‘The Eagle’ Nurmagomedov.If UFC President Dana White has to believed then,the winner of this crucial match up would be crowned as the undisputed lightweight champion,stripping Conor McGregor. This move provides clarity to the lightweight division which looked stagnated at the top.This also has other lightweight plotting for their next move including former lightweight champion Eddie Alvarez.

After losing his title to McGregor, Alvarez has regained his momentum after a ‘Fight of the Year’ nominee battle with former WSOF champion Justin Gaethje.Alvarez won the fight via KO in the third round by a vicious knee.The underground king said,”I’m looking at the title fight a hundred percent,I tried for other fights recently and they just don’t seem to come to fruition, but I just want big names and big fights. I’m not here to be a gatekeeper. Since I joined the UFC, I told (former UFC Chairman) Lorenzo Fertitta and (UFC President) Dana White I’m not here to build myself up. I’ve been the champion of every organization I ever fought in, and I’m here simply to fight the best and biggest names that the UFC has to offer. That goal hasn’t changed and it will remain the same. Whoever they consider the best, I want to fight him and I want to see how I’m gonna do.”

Alvarez further breaks down the UFC 223 headliner,
“It’s an interesting fight and it has an interesting dynamic,” he said. “Khabib has been somewhat unstoppable, and he reminds me of when Shinya Aoki was in his prime. Aoki wasn’t the most well-rounded guy, but he understood how to bring guys into his realm and into his kind of fight. Although Aoki didn’t seem like much in his appearance, he had this unique ability to bring guys into his world. That’s the kind of competitor I see in Khabib and it’s gonna take a unique athlete and person to be able to keep him on his feet and with the right sort of strategy as well.”

He further added,
“I think Tony Ferguson has the heart, the will and the work ethic to do well,” Alvarez said of the interim titleholder. “I just don’t think that he has the type of build or is the type of athlete to beat Khabib. I’ve been watching their fights for the last couple months and when I look at a guy who gave Khabib trouble in Gleison Tibau, I look at a very basic guy who has strong wrestling and is a very strong, athletic person. I kind of look at a guy like myself a little. (Laughs) I think in this division, I’m the only guy who can beat Khabib. I don’t see any other really hard opponents for him. I don’t think Tony is strong enough, and that’s going to come into play. He’s too long and lean and he’s just not strong enough of a wrestler to do it.”

UFC:Justin Gaethje plans to ask for Alvarez rematch or title shot after UFC on Fox 29

Previous articleUFC: Eddie Alvarez weighs in on Justin Gaethje vs. Dustin Poirier
Next articleBoxing: Keith Thurman return pushed back due to injury