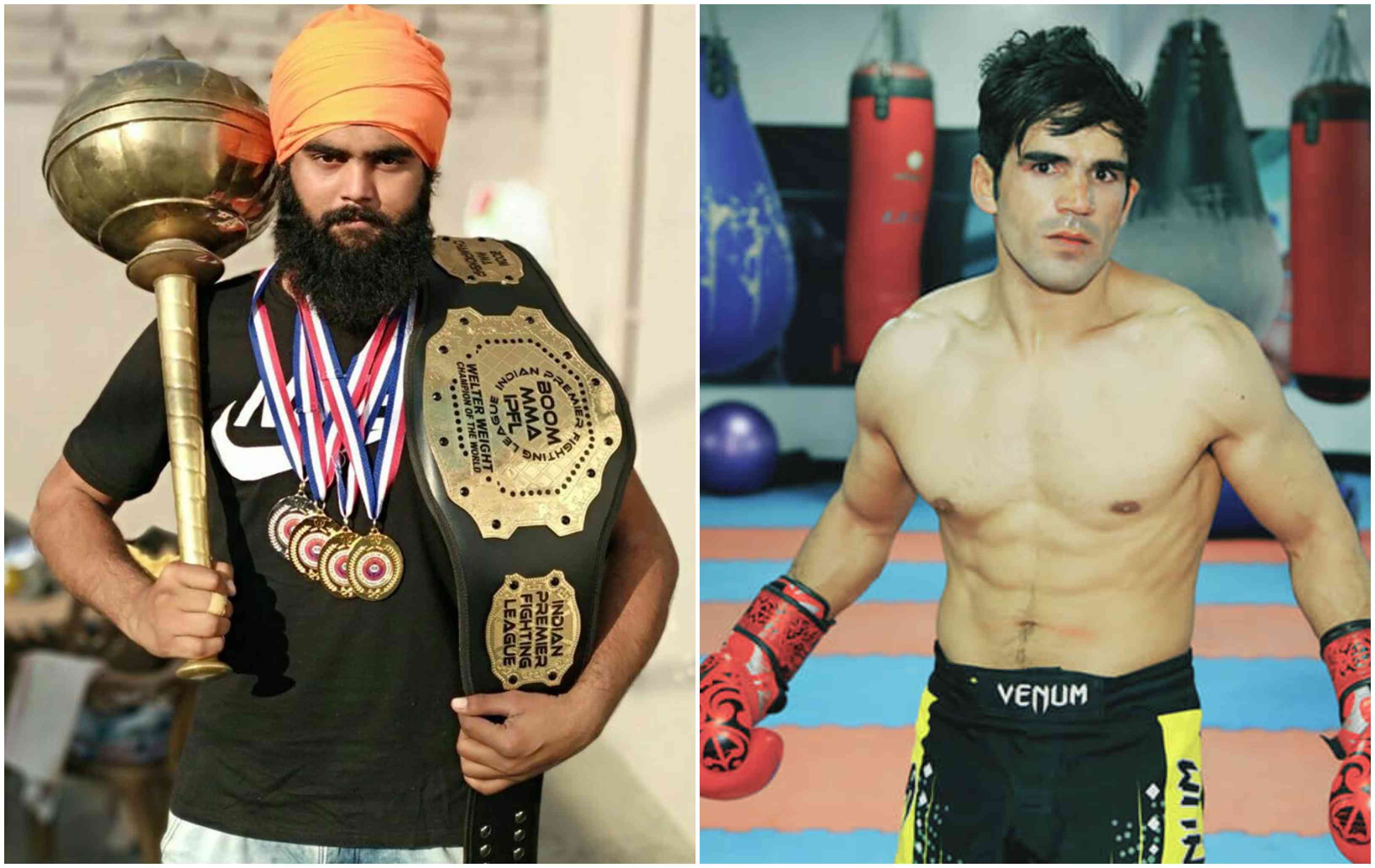 BOOM MMA, a Mixed Martial arts promotion out of Kolkata, India hosted a fight night event at the Radisson Hotel on 28th July, where a total of thirteen fights were put on the card with the main attraction being a bantamweight fight between Ateet Kelvin Gupta (2-3-0) and Baryalai Afghan (1-0-0).

The results of the event are as follows:

The main event was an entertaining one, with the Afghan fighter using his wrestling effectively in the first round, but as the rounds gradually passed, it was Ateet who managed to get momentum on his side. He managed to pin Baryalai on his back and landed a barrage of punches followed by a near submission finish.

However, the fight ended in the third round via referee’s stoppage. As the third round started,  Barlayai landed a right kick and immediately went down as if he had hurt his ankle/knee from it.

It didn’t take long for Ateet to jump all over Baryalai and close in the rear-naked choke, and even though the referee should have awarded Ateet a submission victory since many thought that Baryalai had tapped, it was announced as a TKO victory to Ateet.

After the fight was over, Baryalai was having trouble with his leg, trying carefully to apply pressure while limping around. Notably, there was no medical staff to check up on him.

Although the injury didn’t look as severe, with recent tragedies that have gripped the Boxing world involving the death of Maxim Dadashev and Hugo Santillan within a span of a week, it doesn’t hurt to be more careful inside the ring or a cage as fighters take extreme damage to their body when they step in to fight.

Wanting to get to the bottom of this issue, MMA India Show contacted Ratul Mukherjee, the founder of BOOM MMA, who said that Baryalai was diagnosed by the doctor and it was determined that he didn’t require any further treatment.

“He had a sprain. We had doctors handy. Never referred X-ray. For the record..he had more fun during dinner in the hotel and next he went of for Airport!!,” Ratul said via a text message on facebook messenger.
“Yes, he had an injury but not upto that extent. He face had lot [of] cut and bruises but hospitalization didn’t required… not even a single stitches,”  Ratul said.

When we asked more details about the Doctors, Ratul replied that it was the hotel which arranged the medical team.

“Well, venue partner was Radisson kolkata. They have arranged the medical team with whom they work. Ambulance remains all time handy. If you are asking me the name [of the doctor] then am sorry, I never thought of asking his as it was been looking the by the hotel authorities,” he said.

However, we dug deeper into this matter and contacted Baryalai Afghan on Wednesday evening when he was in New Delhi and was scheduled to board his flight to Kabul, Afghanistan the next day early morning.

Baryalai revealed that he was promised 1 Lakh rupees and a belt to fight in Kolkata by Ratul Mukherjee – both of which weren’t given to him.

“I was told that they (BOOM MMA) will pay me 1 Lakh rupees and I fought a three-round fight and didn’t get my money. So I told Ratul that you’re a fraud,” Baryalai said via facebook messenger.

Not only was Baryalai not paid his fight purse, but he was also not provided with any kind of transportation and accommodation facilities and had to arrange this on his own, he claimed.

“I arranged everything myself, spent nearly 50,000 rupees of my own money, this is not good,..I spent money on flight and then in Kolkata I had to spend my own money to book a hotel room also…this is fraud.

“My leg is alright now, I can walk and have no injuries,” Baryalai concluded.

Now, these allegations were serious and we reached out to Ratul for his comments about this whole issue, where he revealed that there was no such deal for about the money and that he can submit proof about these negotiations.

“Baryalai was never had a deal for money. We have the records and what if we submit he records officially about the negotiations,” Ratul said via messenger.

However, he did not follow up with the proof of his claims. Instead, Baryalai contacted us about a call he received from Ratul Mukherjee, verbally abusing and threatening him for speaking to MMA India. He was also told that that his professional record would not be updated on Sherdog, the holy grail of MMA statistics.

“Ratul insulted me and said that ‘You Afghani people always keep begging, and I will not update your record on Sherdog and why did you talk to the MMA India Show…he said very bad things,” the fighter revealed.

Ratul later sent his statement regarding this whole incident:

“Thank You Baryalai for making the world believe that Boom is able to pay Rs. 100,000/- and hence mma India is being the well wisher of Baryalai so they should ask Baryalai not to fight in Boom MMA from next time because this time we had him the room, dinner, medical and other facilities but next time all the facilities will be cut out apart from him showing up in the cage and fight against 0 incentives in kind or cash. If he don’t then fine but if he fights then what will be the answer or question you gonna do.”

We dug deeper into this matter and contacted the Radisson Hotel in Kolkata where the event was organised. Ratul had earlier mentioned that it was the hotel that arranged the medical facilities.

The hotel employee, however, revealed that the hotel only rents out the hall and any other additional arrangements had to be done by the event organiser. The event organiser, in this case, was promoter Ratul Mukherjee.

“We only give out hall on rents, and the other certificates you have to deposit and rest the organiser has to arrange everything….from Police, NOC letter and other licenses etc,” the hotel reception staff revealed.

It was confirmation that nothing of what Ratul had told us had checked out on further inspection. Worried that Baryalai may not be the only fighter affected, we contacted others who had fought at BOOM MMA in the past.

One such fighter is Jujhar ‘Tiger’ Dhillon who has a professional record of 1-0. Hailing from Chandigarh, he is also the owner of Mahabali Kusti Akhada Shri Chamkaur Sahib.

He faced a similar situation while dealing with Ratul back in November of 2017, when he fought in Kolkata on BOOM MMA FiteXpo card against an Afghan fighter named Omid Azmi and defeated him via rear-naked choke submission.

The fight took place on November 26 in Science City, Kolkata and Ratul told Dhillon that he had to make his travel and living arrangements by himself but he that he will pay for the fight purse. Jujhar came all the way from Chandigarh and when the fight was over, Ratul said that the money would be deposited in his bank account soon.

But to Jujhar’s horror, the money never came and despite interacting for months with Ratul Mukherjee, the 26-year old from Chandigarh was still not paid for his fight. 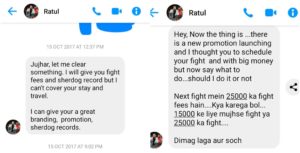 “I contacted Ratul back in the day on facebook when he posted something about wanting fighters for his BOOM MMA card and I responded to it. He [Ratul] then said that I will get a pro fight, it will be a title match…India vs Afghanistan…and for winning the prize money would be ₹15,000 for winning and ₹9000 if I lost the fight…and on top of that I had to pay for travelling, accommodation from my own pocket and Ratul would only provide me with fight money, branding, Sherdog record etc.

“But after the fight, I wasn’t given my fight purse. Ratul didn’t tell anything then, but after two to three months, he started making excuses,” Jujhar Dhillon Said.

“When I came to Kolkata, I made the arrangements by myself and I stayed with my friend Shiba Banerjee, who is the head coach at Alpha Omega combat sports gym in Kolkata, but just a day before the fight, he said not to bring anyone from Alpha Omega as Ratul doesn’t have good relations with them.

Then I said that they will corner me as I don’t have anyone else to corner me, and then Ratul said that Alpha Omega crew will be limited only to cornering me and that they weren’t welcomed to the [rest of the] event.”

After the fight, Jujhar said that Ratul backtracked from the promise of paying him ₹15,000 even though he had won the fight and the reason given by him was that Jujhar had brought guys from the Alpha Omega gym to corner him.

Jujhar says that these all were excuses were floated as reasons to not pay him for his fight.

He also revealed that later Ratul started making other excuses like the sponsors pulling out of the event being the reason why he didn’t have money.

“I later went to Kolkata for a job and wanted to confront him about the money, where he started making another excuse about starting a new MMA promotion called Wardog MMA and that he will give me a fight there and do this…do that…he made all kinds of excuses and he has been doing it till this day…Now he doesn’t even pick up my phone,

When MMA India contacted Ratul Mukherjee for clarification on these allegations, his reply stunned us. Not only was there no substantial evidence forthcoming to counteract the allegations made by the fighters – but he expressed arrogance that the fighters needed his promotion, BOOM MMA, more than the other way around.

Further on Jhujhar Dhillon’s allegation, here’s what Ratul had to say: 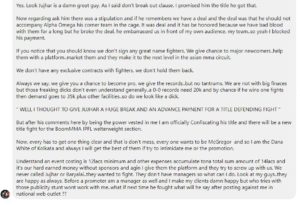 “Yes. Look Jujhar is a damn great guy. As I said don’t break out clause. I promised him the title he got that. Now regarding ask him there was a stipulation and if he remembers we have a deal and the deal was that he should not accompany Alpha Omega his corner team in the cage. It was deal and it has be honoured because we have bad blood with them for a long but he broke the deal, he embarrassed us in front of my own audience, my team..so yeah I blocked his payment,

“Now, every has to get one thing clear and that is don’t mess, every one wants to be McGregor and so I am the Dana White of Kolkata and always I will get the best of them if try to intimidate me or the promotion,” Ratul said via Facebook messenger.

Of course, for a man who refers to himself as the ‘Dana White of Kolkata’, you can expect a certain level of bullishness associated with him – no matter how egregious his actions and words come across.

And true to nature, Ratul’s overall attitude towards the fighters’ safety and pay was entitled and arrogant, to say the least.

For Indian MMA to take steps in the right direction, promoters need to start caring more about fighters. For the audience to take to the sport and pull behind its proponents, the promoters need to do that first.

Without that, the sport will never truly break into the mainstream consciousness of India. For starters, however, fighters have to wisen up and realize that it is absolutely mandatory for them to sign iron clad contracts with promotions instead of going by word of mouth.

Previous articlePetchdam Could Be In For The Toughest Title Defense
Next articleBRAVE NEWS #63 – London recap, Stephen Loman profile